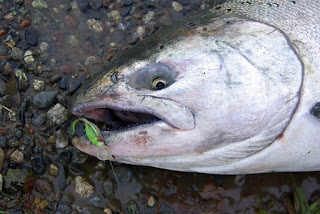 Don Robert's and I are back down on the south coast chasing fall chinook on flies.  This is our sixth year together doing the annual "salmon slug fest".  Today we had a slow day with two fish hooked and only one landed.  The fish above measured 37"X22" putting it in the mid-20's.  This year's run has a high percentage of 5 year olds so we should do well on larger fish over the coming days. Stay Tuned!
Posted by Dean Finnerty's fishing and hunting at 8:18 PM No comments: 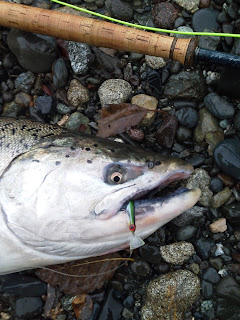 I just returned home from four days of salmon fishing on the south coast.  We rose fish to swung flies each day.  Some days more than others. We had weather that ran the spectrum from torrential rains, 80 mph winds, snow and one day it was sunny, calm and in the upper 50's.  Only on Oregon's south coast in November can you get that kind of mix! 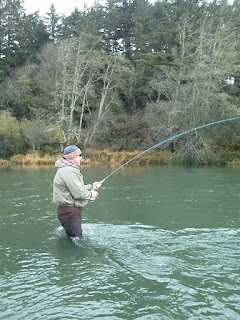 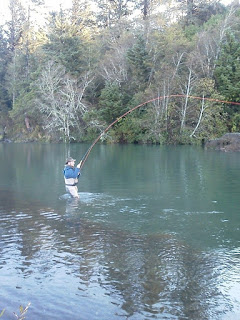 Chris with one of several fish on "Sunny Sunday" with beautiful water color. 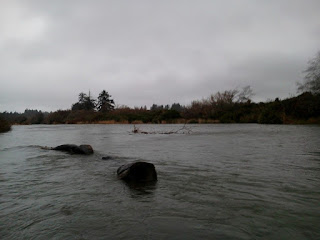 BIG MUDDY with some woody debris!
Late Sunday night the winds and rains came with a vengeance!  We fished hard all day Monday in horrible winds and rain.  By Monday afternoon the winds were blowing so hard that a gust grabbed the partially opened drivers side door of my Suburban and folded it forward until it came to a stop near the front fender! leaving the sheet metal bent and contorted in such a horrible way that it would only open just wide enough for me to squeeze through after I made the mistake of closing the door.  Not to worry though, I few well placed whacks with a small sledge hammer and some tactically placed pry's with a crowbar and I've got it workin' good as new....well mostly anyway. 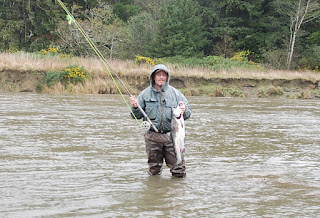 By Tuesday morning the river was raising inches every hour.  My buddy's bailed on me.  I decided that this was a great opportunity to experiment a bit.  In past trips to Alaska I've always been amazed that in thick glacial till, silvers can still find your fly in water that yielded less than three inches of visibility.  On my local rivers, I've always said that if you wade into the water until the depth is "knee deep" and you can still see your wading boots, you can fish.  I started at first light with that kind of visibility...barely!  An hour later the "grit" in the water increased until visibility decreased to less than a foot.  Leaves, branches, limbs and even small tree's started to drift past. I kept swinging.  When the grab came, I can honestly say that I was STUNNED!  It even took a few moments for me to register what had happened.  I landed the fish in the above picture and kept the hatchery fish for our upcoming Turkey Day Dinner.  Knowing that it had to be a fluke, I stepped back into the run with the same four inch long, chartreuse and bright yellow Clouser, fully expecting that to be my last grab of the day.  I was letting the fly swing into the bank where I had caught salmon in past seasons when high water prevailed, but nothing this muddy.  The current along this edge slows to a crawl and the depth is about mid-thigh with noting but very small coble.  No structure, but a great little channel for upstream racing salmon that have been waiting for this kind of gully washer. I had several obvious "line bumps" over the next half hour so I knew that lots of salmon were on the move and eventually the fly would swing into the maw of another chinook, even still I was astonished when the second salmon of the morning nearly jerked the spey rod from my grasp when it attacked the big-bright Clouser.  By the time the second fish was hooked, visibility was down to 6-9"!!!  By the time this battle ended, the river had risen to a level that it really wasn't even a good idea to stand in it anymore so I called it day.  The point is, I learned a few valuable lessons.  If your worm ain't in the water, ya ain't gonna get bit!  and Salmon can and will eat your flies in some pretty horrible water if you place the fly where the fish are, or are going to be.

This week Don Robert's and I will be joining forces again for our week long, annual "Salmon Slug Fest" as he's come to call it.  In the ten years or so that we've been taking this annual trip to the south coast, this will be the latest in the month of November that we've done the trip.  Not that this is a concern, because I routinely fish for Fall Chinook on the south coast all the way up until Christmas, but after the weather I just endured, I'm not so sure that I'm ready to cast in 60 mile an hour winds again so soon, but if the water's high and muddy, I'm still fishin'!!...in fact, I'll still be "CATCHIN' UM"!

﻿
Posted by Dean Finnerty's fishing and hunting at 4:01 AM No comments: