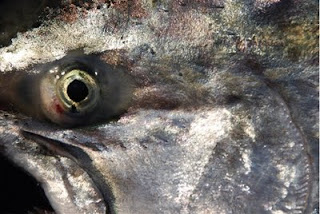 I'm a fly fishermen. Plain and simple. And yes, I fly fish for springers.  With good water conditions they're very do-able, especially my larger bugs on spey rods.  But the number of "good water" days we get on the Umpqua during the months of April and May can usually be counted on one hand.  That means if you want to catch the "King" of all salmon consistently, you better know how to fish conventional tackle for the other 90 plus days that we call "Springer Season". 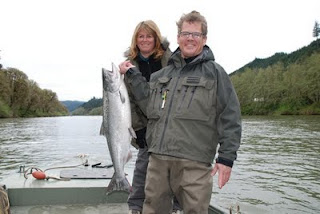 This week begins the start of my spring chinook season.  Water is high, murky and fairly cold.  Great conditions for gear trips, but not so much for my fly clients.  My season will start off with two of my favorite clients (pictured above) Johnny and Fran Delashaw.  Last season we had a great day, hooking five and landing three. 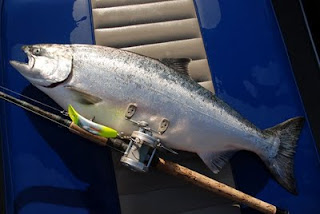 During conventional tackle trips I fish bait-wrapped Kwik-Fish, Spinners from R&B Tackle and Rogue bait-rigs. All work very well and my choices are based on water temp, turbidity and where I anchor my powerboat. 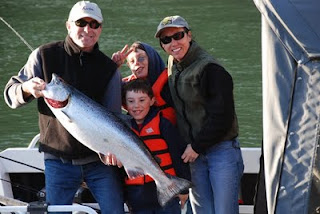 Its the kind of fishery that I look so forward to every year.  Days are getting longer and even once in awhile the sun shines.  The tree's are all starting leaf-up with the promise of a new summer.  Its VERY relaxing as you sit in an anchored boat with rods sitting in their holders, waiting patiently for the rod to double over and line to start screaming off your reel!  Cups of coffee go flying, sandwiches are tossed aside as folks grab up their rods!  AWSOME.  Then the ensuing battle will force us to toss the anchor rope and float overboard so that we can go after the fish thats racing off downstream at an incredible pace before it spools us.  INCREDIBLE.  Its fun for the whole family.  Terry and his family in the above photo camp on the river like many folks do and stay fishing for several days at a time.  Some of my fondest memories of fishing with all of my boys was during the years when my wife was finishing her degree at the U of O and each evening that I wasn't working, the boys and I would head for the river, fish for springers, b-b-q hot dogs or burgers for dinner, work on their homework in the boat and fish till dark. 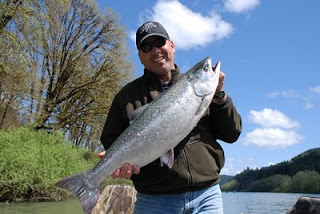 No doubt I love to fly fish, but these springers are soooooo much fun, fight soooooo hard and eat sooooo good that I don't complain one bit when water conditions force me to leave my fly gear at home and break out my level winds and salmon rods and enjoy some of the best fishing the Umpqua has to offer!

Posted by Dean Finnerty's fishing and hunting at 2:45 AM 1 comment: 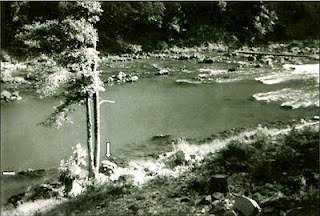 This very cool old picture of the McDonald Pool in the fly water section of the North Umpqua River was e-mailed to me this evening from Frank Moore.  The black and white photo was taken 60 years ago!

Frank explained that the murky colored water was caused from the construction that was going on then at Soda Springs Dam.

I've added the two arrows (one horizontal the other vertical).  The horizontal arrow I placed to show the location of the current casting station most all of us use nowadays.

The vertical arrow I placed to point out what Frank used to do when he was guiding.  If you look beneath the arrow you'll see a large pile of rocks.  Each summer Frank would gather streamside rocks and create these piles.  The rock piles would place the caster higher off the water, making it a little easier to make the longer casts needed to cover the water.

Each winter, high water would come along and wipe out Frank's little pyramids making this chore necessary at the beginning of each new summer season.

Also, note the douglas fir tree stump up the hill and behind the casting platform.  A very energetic angler deemed the trees placement a hindrance to his backcast so the tree had to go!  And to think I feel a little guilty every time I snip a branch or two to clear a casting lane!  Times have changed.

Frank said that when this photo was taken, there obviously was no highway running along the river.  To reach the pool (and many others then) you had to hike down the ridge from the old road (where Frank's home now sits) and walk a trail through the woods in the area where the Bogus Creek Camp ground is located today.  Times have changed indeed!
Posted by Dean Finnerty's fishing and hunting at 9:57 PM No comments:

How many adjectives will you be known by? 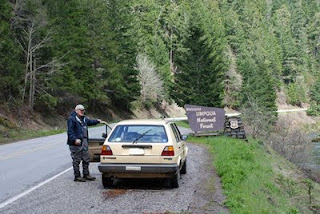 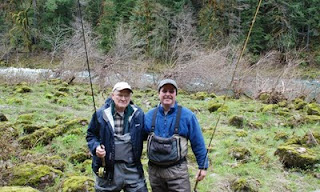 Frank found one moments before this pic was taken.
Behind me as usual!
These are just a handful of adjectives used to describe my friend, Frank Moore.  He came into my life at a time when I really needed to meet a man like him.  To say that his friendship was "life changing" for me is a huge understatement.  He is the reason I'm a fly fishing guide on the North Umpqua. He has taught me so much about life, love, friendship and family, not to mention less important things like casting a fly, steelhead behavior and hundreds of other things related to fly fishing. 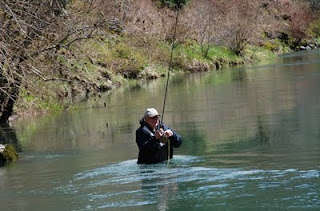 Wadin' Deep and castin' far!
Frank and I became friends many years ago when my oldest son's were just little guys tying flies at my booth at the Roseburg Sportsman Show.  I still marvel at how much he and his beloved wife Jeannie have come to mean to me and my family.  Our love of the Moores is definitely not rare or unique.  Its so amazing to me when I consider how many people in this world feel the same way about the Moores.  During the summer season, I often work "split days" with clients where we fish for several hours in the early morning, "split" during the mid-part of the day when the sun is full on the water and then get back together late in the afternoon and fish until the bats are flying.  During the mid-part of the day, I usually sleep at Frank and Jeannie's.  Rare is the day when I arrive for my afternoon siesta when there isn't at least one other "guest" already at their log cabin home.  I've met other friends of the Moore's from all points of the compass.  I don't think there is any place on the globe where they haven't been, fished and made friends.  I don't think I've ever read a book or magazine article about the North Umpqua where there isn't at least a mention of Frank, if not whole chapters and even books!  Amazing folks these Moores!

Today I got to spend the day swinging flies with Frank.  Of course he found fish behind me.  He ALWAYS does!  Someday, I'm going to figure out a way to fish behind him, but so far thats NEVER happened... NEVER!  I found fish too!  Its hard not to when your out with Frank.  With all the time I spend guiding on the North throughout the year, I often (a bit arrogantly) start thinking there aren't too many more places for me to learn where fish hold at various river levels and conditions.   Of all the places Frank took me to today, not one of them were places I had fished before during the winter run...NOT ONE!   and as usual I learned a bunch about steelhead behavior, learned some new holding water and had a great time with my friend.

What a great day!  Thanks Frank!

Posted by Dean Finnerty's fishing and hunting at 12:19 AM 3 comments:

Today, I went out with another one of my boys.  Rhett loves to hunt and when he saw Hunter's bird from yesterday, thats all it took to get him motivated and get out there with me.  We hunted a new area, not far from where we went yesterday.  It didn't take long to get a pair of toms to answer my "owl" call.  Once located, the rest was pretty easy.  At least at first.  For some reason the pair of toms hung up out of range and I couldn't get them to budge.  Fearing they were just going to walk off and never be seen again, I decided to take Rhett on a quick little stalk to close the distance and get him into range.  With the help of so wind to cover our noise and a bunch of christmas tree-sized douglas firs, we were able to get within 25 yards, plenty close enough for my Browning "gold" and Rhett's great shooting ability. 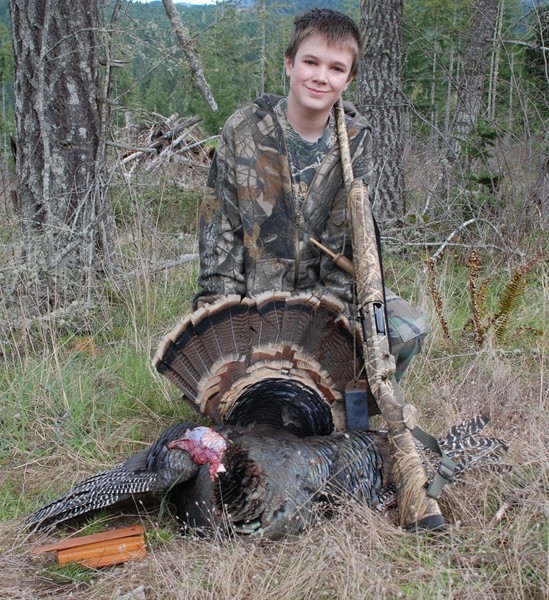 Tomorrow is my day to play, so Frank Moore and I are going to spend the day swinging flies.  I can't wait!
Posted by Dean Finnerty's fishing and hunting at 8:24 PM No comments: