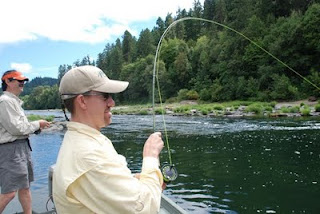 Over the past several days I had the opportunity to spend time on the water with my favorite tackle rep., Dick Sagara (on left above) and a new friend, Jesse Riding of Rainy's Fly's from Logan, Utah.
I've just recently become a fly innovator for Rainy's and this trip was an opportunity for Jesse and I to get to know one another better, do a little fishin' and thank's to Dick and Jesse, do a bunch of field testing of some of  Rainy's new Steelhead and Smallmouth bass flies and a few of the new products Dick has in his line of great fly fishing products.
Dick has been a friend of mine for many years since I began fishing a lot of Temple Fork Outfitter (TFO) fly rods and spey rods. 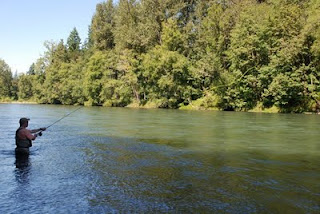 I'll admit, I've not been on the "switch rod" band wagon like alot of other folks.  I've always kind of felt that they don't really do either type of casting very well.  The rear grip always seems to get in my way while traditional casting and their shorter length doesn't allow the type of distance casting and superior line control I get with a more traditional length spey rod. As a result, I've not really been a fan of the switch rods.  Until now.  Dick brought along a brand new twig, loaded with a brand new "Ambush" line from Wulff.  WOW!  What an absolute blast to cast and fish.  I've not been this jazzed about a new fly/spey product since the first time I cast a Skagit line.

While I'm publicly admitting that I'm not a fan of some new gee-whiz spey gear, I might as well also mention that I've not been all that enamourred with all these short-belly "Scandi" style lines either.  Almost everyone of my clients who have shown up for a day of fishing with me, equipped with one of these Scandi lines, has created problems where problems didn't exist before.  Specifically, I've had to spend alot of time working with them on their casting because the short belly lines invariably create problems with guys pulling their anchor...all day long.

So when Dick was explaining the characteristics of these lines, I kind of cringed a little, thinking that a 20' heavy bellied line was going to be awful to spey cast.  What I found from casting these lines for most of the day was that they really cast incredibly well.  Yes, you have to slow down and let a solid anchor build, but once the anchor is formed, the heavy weight built into this short head holds a tremendous amount of casting energy and really allows you to shoot alot of line.  Where they REALLY SHINE is in casting them on a switch rod or single handed rod and spey casting in tight quarters.  UNREAL!  I was cackling like a loon as I shot 100' plus casts across one of my wider runs on the upper Willy with a traditional cast.  I cast the line just like I would a 30' shooting head.  Bring the head up to within a few inches or a foot of the rod tip.  Roll cast in the direction you want the final cast to go.  Allow the head to come into contact with the surface of the water and haul back smoothly to execute the back cast.  Now come forward on the cast and do a short pull down with the fly line held in your weak hand and shoot the line, leader and fly across the river.  Tight line, super-tight loops...AWSOME!

When we entered those runs where spey casting became difficult because of overhanging Alders and deep, un-wadeable water this rod/line combo was such a pleasure to fish.  The rod I enjoyed the most was an 11', 6 weight switch rod in the TFO Deer Creek series matched up with a 400 grain Ambush line.  This is a full floating line that I had a ten foot leader on.  I had a size 4, traditional hair-wing steelhead fly attached to the tippet.  While I didn't put any tips on it, I have no doubt these lines can handle them and have plenty of energy to turn everything over with authority.  Even out to 90', roll casts performed as a single hand cast would snap tight to the reel.

If you go to http://www.royalwulff.com/ and check out the page on Ambush lines you can learn more about these very cool lines.  My hope is that they will begin making them in sinking lines for my salmon fishing.  That will fill a void that exists (in my opinion) since manufacturers have begun phasing out 30' shooting heads.

Posted by Dean Finnerty's fishing and hunting at 8:41 AM 1 comment: