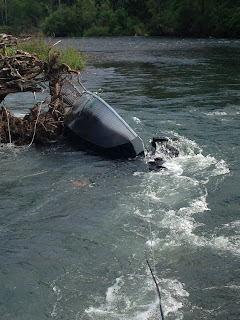 My last post was about a friends unfortunate boating accident on the upper Willamette and our efforts at recovering his boat safely.  Yesterday, I found out about another boat that had gone down in exactly the same really nasty spot and the owner asked for our help in recovering his boat. 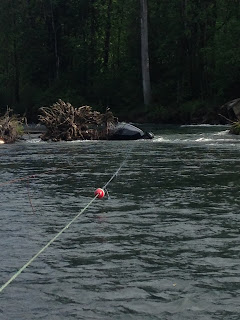 My son, Colby, and I met the unfortunate fellow who had endured a horrible accident (nobody was injured thank goodness) at the downstream take out and we ran upriver to find his boat pinned in nearly the exact spot as my buddy's boat from a little over a week ago.  Because this boat was hung up more downstream of the root wad than my friends boat,  I needed to find another spot to begin the extrication process.

I used the same technique of securing the boat to the root wad with a short piece of rope and then using my pulley's and come-a-longs to begin carefully pulling the boat free.  I noticed a length of 5/16th inch stainless steel cable run through the port side of the boat and tied to a root on the stump.  I asked the boats owner if he had secured the boat to the stump with the cable.  He said that he hadn't and had no idea who put the cable on his boat?  I later discovered that this 100' length of cable ran from the boat to the tree on the right side of the channel in the below photo.  Had I chosen to run my power boat down that channel, I would have sunk my boat on the submerged cable and possibly had a tragic ending to this story.  Luckily, I chose to run the narrow channel to the right of the mid-stream tree.  It appeared to us, that someone else with a power boat had come to the scene over the past several days and attempted to recover (unsuccessfully) this fellows boat.  Who knows what their intent was, but the fact that the LEFT THAT CABLE SUBMERGED ACROSS THE CHANNEL IN A VERY DANGEROUS SPOT, PUT OTHER LIVES AT RISK!  If you're going to go out and try and recover sunken boats in heavy, dangerous currents with lots of hazards, don't make matters worse by leaving behind submerged cables!!! 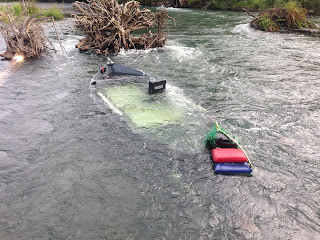 After we got the boat pulled off the root wad, it simply swung around under the force of the current and came to rest on the bottom, downstream of the obstruction. 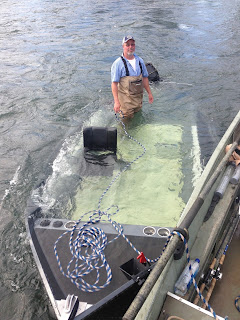 Its an odd feeling standing on the bottom of a drift boat full of water! 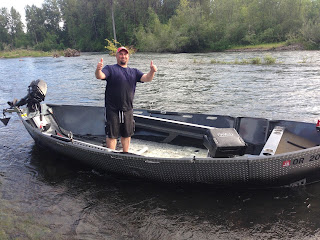 Once we got the boat off the root wad, I used my power boat to pull the sunken drift boat onto a shallow gravel bar.  That was actually the most difficult and dangerous part of this recovery.  Once it was in water shallower than its sides, we simply used buckets and a hand-bilge to get the water out and get it floating again.  There was no real damage to this boat.  It had a few minor scratches and dents and lost some of its seats, flooring and oars.  I have a set of oars on my powerboat so we put them in this boats oar-locks and we were ready to head down to the take out. 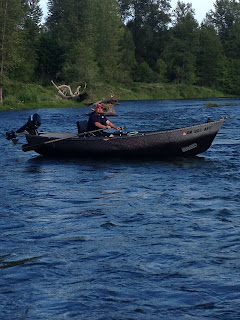 Back on the water! 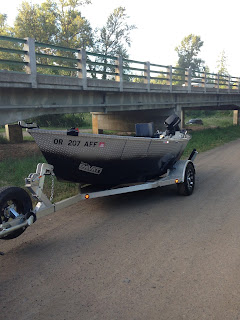 Back on the trailer!

There have been five boats sunk in the past couple weeks on the upper Willamette.  So far, no one has been injured (Thankfully).  There is another boat (similar to my old red, white and black Clackacraft) sunken above the Jasper Bridge.  I've not heard from anyone on this accident, but just be aware there are some VERY REAL hazards to safe boating on the upper Willamette about a mile below the Pengra boat launch.  These  tress and root wads are located near the bottom end of the island near the old steam shovel that has fallen in the river.  The one root wad has been there for years.  A new tree and root wad is in the main channel creating a very hazardous situation.  PLEASE USE CAUTION!  Wear your life jackets and scout this section out carefully before trying to run your boat through there.


Posted by Dean Finnerty's fishing and hunting at 11:38 PM