I'm off today.  Back on the North for the next two days.  Ended my time with Harry yesterday.  Had a blast, as always.  Learned so much again! We got hit with some weather the day Harry arrived so the rivers started out a bit high.  We fished a small coastal stream that Harry loves.  Saw a bunch of fish in several runs. Didn't touch a one of them one our swung flies.  We caught some decent cutthroat and that's always nice. 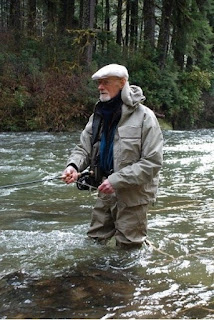 We spent the last two days on the North Umpqua.  We fished some of my favorite water outside the fly area.  We fished HARD!  Didn't touch a fish the first day.  Yesterday we had three encounters, the sun was shining and it was 74 degree's!  Last night I gave Harry a hug goodby and wished him well at this weekends fly tying show.  I can hardly wait for next winters adventures with Harry.

If your interested in some additional comments and thoughts from my days on the water with Harry this week, hop over to my other blog http://steelheadflyfishing.wordpress.com/.

I spent the last two days swinging flies with new clients.  Saturday we didn't touch a fish.  Sunday we had five encounters with steelhead and had a ball.  There are fish in the fly water in good numbers.  Just stay out of the tailouts as most have actively spawning fish now.  Several of the fish we rose on Sunday were bright and shiny as a new dime and the gear guys in the gear water are still catching lots of bright, fresh fish so the run will easily last well into late April again this year.  I also heard of a 32 pound springer taken below Elkton on February 24th!  Its that time of year again already!!!

﻿
Posted by Dean Finnerty's fishing and hunting at 8:43 PM 3 comments: