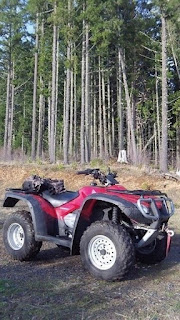 Hard to believe that our south west Oregon Spring Bear season is just around the corner.  I've recently picked up a new "toy" for the upcoming season.  It's a Honda 500 cc four-stroke "Foreman" ATV complete with a back seat (not on the bike) and a cool little electric winch.
I took it out this evening for a few hours of scouting and found a few stumps that were tore up last fall.  In the coming weeks I'll be puttin' some serious miles on this ATV scouting areas where I'll be chasing spring bears in April.  As it was I saw a nice flock of long beard Toms and a ruffed grouse.  I also found a lot of elk sign and some decent deer rubs that were made last December.
Posted by Dean Finnerty's fishing and hunting at 7:13 PM No comments: 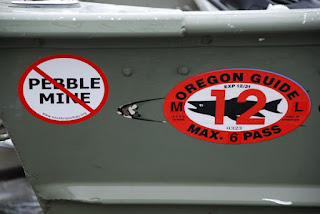 For anyone who enjoys the outdoors, particularly the Alaskan Wilderness of Bristol Bay has likely heard about the proposed environmentally disastrous "Pebble Mine".  If you haven't, you need to do three things.
1. Get educated. Read my friend's article by clicking on this link;﻿ http://www.rogueangels.net

2. Get involved! don't do what I have always done...sit back and assume that others will get it done.

3. SCREAM FROM THE ROOF TOPS TO LET THE WORLD KNOW AND STOP THIS FROM HAPPENING!.

I've gotta scoot now, I have a letter to write to another friend of mine;
Congressmen Peter Defazio
http://www.defazio.house.gov

If not me? who?
Posted by Dean Finnerty's fishing and hunting at 12:34 PM No comments: