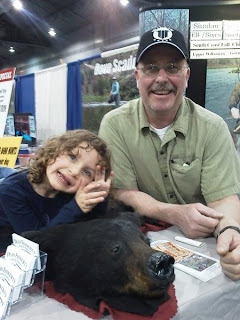 Tegan Sheppard and her equally famous parents (Marty and Mia Sheppard) came by my booth at the Northwest Sportsman Show at the Portland Expo Center today.  Tegan's exploits can be routinely found on the family business blog site "Metalheads" (see link's bar at right)  For the past couple of season's the Sheppard's and I have tried to work out a date in our busy schedules to share our rivers with each other.  For me, I'll get a chance to revisit my old stompin' grounds on the Sandy.  For Marty and Mia I'll get them out on the North Umpqua.
For now, it was just a blast to finally get to meet them in person and spend some time watching Tegan bring smiles to all and warm a big hall with her charm! ﻿
Posted by Dean Finnerty's fishing and hunting at 5:48 PM 3 comments: 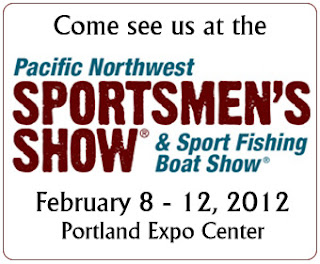 In the morning I head for the Expo Center in Portland, Oregon where for the next 5 days I'll have a booth and I'll be giving free seminars on fly fishing southern Oregon.
Over the years I've done a lot of different seminars at the O'laughlin Shows, but I've got to admit, none have been quite like the one I'm about to unveil.  This "beast of all beasts" has over 125 power point slides that cover every type of fly fishing opportunity I offer in "southern" Oregon.  I use quotes, because I do "stray a bit" in my geography : )  I'll be covering steelhead (winter and summer) fall chinook, coho, spring chinook, trout, smallmouth bass, largemouth bass, and shad! You'll see more "grin and grab" shots than you've probably EVER seen in any seminar!  Stop by and say "hi" and if you have time, please plan on attending one of my free seminars in the fly fishing theater.
I've also got a show special on two trips I offer that knocks more than $100 off the regular rate!
Your choice, McKenzie trout and/or steelhead out of my drift boat or powerboat is one trip I'm offering.  The other trip is summer steelhead on the upper Willamette "town run" out of my drift boat or powerboat.  Both trips are full day/two party trips for only $249.00.  I'll supply all the gear, you just bring your own lunch!  It would be a great Valentines day gift for your favorite valentine.  It would also make a great fathers day or mothers day gift and gift certificates will be available!
The small print; you have to book this trip at the show or get ahold of me during the dates of the show and a $100 deposit is required.  You also have to say you LOVE the blues (just kidding) I also except Visa/Master Card/Discovery and American Express so you can put it on card if you like.  Can't beat that deal!
See you all at the show!
Posted by Dean Finnerty's fishing and hunting at 5:58 PM No comments:

Over the past couple of seasons I've ran into another phenomenon that I haven't seen before. Steelhead missing pectoral fins.  Sometimes these fish are missing one pectoral fin.  Others have both missing.  All are hatchery fish.  Years ago, I would see this occasionally because hatchery fish were once marked this way. 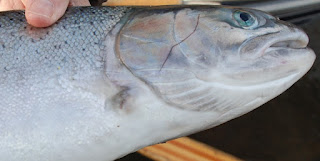 ﻿This hatchery fish was harvested in my boat on Friday while working in the 20th annual Umpqua Steelhead Enhancement Derby (my partner and I ended up taking 2nd place with 35 steelhead in two days of fishing the Umpqua system) This fish was caught on the south Umpqua and was not only missing the adipose, but also both pectoral fins.

Not long after we caught the fish missing all the fins, we hooked this fish.  This is what the fin's look like on a native south Umpqua winter steelhead.

Back in December, Justin Crump harvested this hatchery fish while fishing the Umpqua with K8 and I. The port-side pectoral fin is missing from this fish.  Also note the crooked, mis-shapen dorsal fin and missing adipose.

Later that day, K8 caught this gorgeous, perfect native.  Fin's intact, straight and translucent. PERFECT!
When I first started seeing hatchery fish with the adipose missing and a pectoral fin or two missing, I erroneously believed that the fish were strays from some other state, possibly California.  I knew that Oregon hasn't done any pectoral clips for years.
Recently, I've learned that over-crowding of steelhead smolts in concrete hatchery raceways are the culprit.  ODFW is aware of the problem and have made efforts at reducing this problem.  It seems that when too many steelhead smolts are packed into hatcheries, the little fella's get to nippin' at each others fins causing them to be bitten off.  I'm not sure why they target the pectoral fins only and not other fins, perhaps its because of the pectoral fins proximity to their eyes?  Might explain why it seems flies with "eyes" seem to outfish flies without? Just another thing to ponder during the middle of the night when I can't sleep, thinking about steelhead!
I've spent a fair amount of time thinking about these missing fins.  This has brought to the forefront more questions and points to ponder.  I haven't come up with any answers to these thoughts, but I wanted to share them.  Why don't we see this phenomenon with hatchery Salmon?  I've seen bent, crooked and mis-shapen fins, but not missing fins - other than the adipose fin intentionally clipped by hatchery personnel on coho and chinook.  Could it be that steelhead are just more aggressive than salmon?  Could it be that Steelhead just don't do as well as Salmon in crowded raceways?  Why don't we find hatchery steelhead on other rivers missing fins? Its only on the Umpqua and its only the past couple of years?  I don't recall EVER seeing this on hatchery fish we've caught on the Siuslaw, Alsea, Siletz, Wilson, Willamette and McKenzie.
As I said, ODFW is aware of the problem and they have addressed the issue by taking some Umpqua hatchery smolts to the Cole Rivers hatchery to be raised prior to release in the Umpqua to help spread the little guys out a bit.  They're hoping this will alleviate the problem.  Time will tell.
Posted by Dean Finnerty's fishing and hunting at 9:48 AM 1 comment: