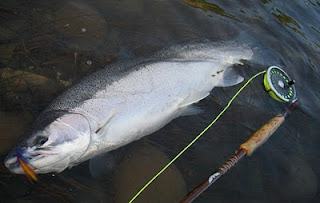 Photo courtesy of Todd Hirano
This past week was mainly spent getting after winter steelhead.  Had some good days, had some slow days.  Had some VERY crowded days too.  Can't say I blame all the folks wanting to get in on this very unique opportunity, but I sure miss the days when I had most of it all to myself.  Most days its been so busy that I've not been able to fish my favorite runs.  Folks get in them, and stay there making pass after pass after pass.  Eventually, I just give up and move to other areas of the river for a little solitude.  That's the nice thing about a river system this big, if you know where to go, you can still find some water for yourself. 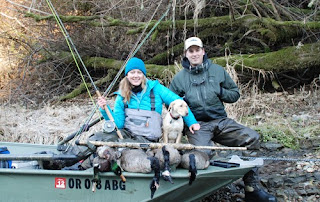 A highlight of the week was spending a great day with friends Kate Taylor, Justin Crump and their awesome yellow lab pup "Kada".  We did a "cast and blast" that was both productive and really fun.  In a few short days, "Kada" has not only learned to swim, but also fetch up some ducks! If I can figure out how to make a "snap-t" with my spey rod while my shotgun is slung over my shoulder, the ducks and geese are gonna really be in trouble!
The river is predicted to go out in the coming days, once again giving all the kegged up fish a chance to move on up river.  That's a good thing.  I'll miss the great swing water we've had, but I've got ducks and geese to hunt before the season ends and my North Umpqua season is really getting underway now and I need the fish to have some water to get there.
Posted by Dean Finnerty's fishing and hunting at 8:02 AM 2 comments: