Drift Boats and How to Maintain Them
﻿ 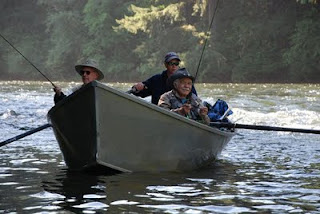 I purchased my first driftboat when I was 15 years old.  It was an old wooden boat, I think a 15 footer. I paid a whopping two hundred bucks for the thing.  It didn't come with a trailer and it was in really bad shape.  I remember telling my Dad when he came home from work and found the thing in our garage, that it belonged to a "friend" and I was just "helping him fix it up".  I'm certain that Dad didn't buy it, but he had long since given up on my youthful enthusiasm when it came to my fishing.   I don't even remember now what ever happened to that first boat, but since then, I've owned a bunch of driftboats.  I've owned wooden boats, glass boats and aluminum boats.  Most have been 16' boats, but they've ranged from 10' (pram) to an 18' hulking monster wooden boat that my buddies and I used to use to haul ten dozen duck decoys to a gravel bar in the Columbia at Biggs Junction.  At one time or another, I've had drift boats on nearly every body of water in Oregon and many in Washington.  From east-side rivers and major white water, to ocean bays and mountain lakes.  Over the past twenty years I've spent the bulk of my time on Oregon's Umpqua river system, the McKenzie river (birth place of todays design of driftboat) and a bunch of south coast rivers. 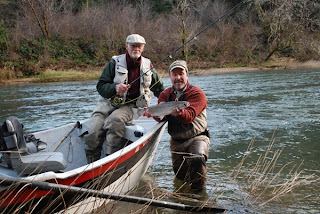 Harry Lemire and I with my 'ol Clacka.
I say all this, simply to explain that I've spent a fair amount of time in and around driftboats and have, over the years, learned a bit about maintaining them.  Perhaps this knowledge may help you in your efforts at using and safely enjoying one of the greatest boats that man has ever designed!  Please don't hesitate shooting me an e-mail if you have questions about taking care of your boat. 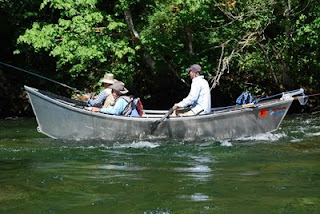 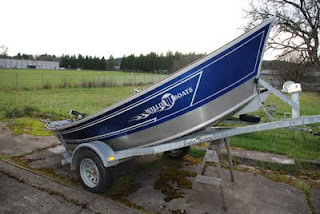 This is my latest boat.  It's a 2005 Willie Guide model.  It's 16'X54" and is a pretty basic boat.  Its in great shape and needed only minor clean-up and a new coat of gluv-it or coat-it applied to the bottom to get it ready for service.  I'll cover that process in a bit.

This what the bottom looked like.  Almost all of the previously applied gluv-it had cracked, flaked and fell off the boat from an improperly applied coating.  If you look closely, you can see large areas of oxidation from saltwater getting in between the gluv-it and the aluminum. 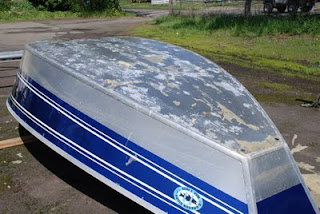 I started off this latest project with an interest in making it "shine", so I chose to take on the relatively simple process of polishing the lower sides of the boat where it hadn't had the factory paint applied. 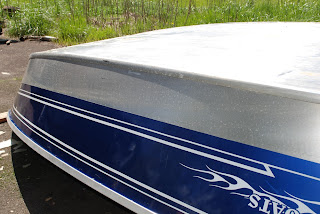 When untreated aluminum is allowed to have saltwater dry on the surface and left there for long periods of time, the salt begins to oxidize the surface of the aluminum, causing a white powdery dust like substance to form.  If left on the surface long enough, it can actually begin to break down the aluminum and leave permanent pits in the metal.  This boat had been used in the bays and afterwards was not cleaned up.  When fishing in the salt environment with aluminum boats, its always a good idea to have zinc anodes placed on the hull to protect the aluminum.  All of my powerboats are equipped with "zinc's" and I make a habit of "flushing" out the boat with freshwater at the end of each day I'm working in the bay.
Once the boat has been allowed to have these deposits begin forming, it will require some serious "elbow grease" to repair.  I use a hand grinder with a buffing wheel and a cutting compound to begin the polishing process.  For this boat I used a regular 8" grinder with a lambswool type of buffing pad and MacGuires Heavy Cut 4 cutting and buffing compound.
I started out by turning the boat over and placing the top of the bow and the top of the transom to rest on wood planks to prevent damage.  Then I used 1" blue painters tape to protect the edge of the painted surface from buffing the raw aluminum.  Then, starting at the bow, I worked the buffing wheel with cutting compound applied to it, along the entire length of the boat and buffed out all the oxidized marks.  This took approximately 2-3 hours per side (starboard/port).  I also chose to do the bow chine, bottom chines as well as the transom and its chines.  I left the exterior handrails unpolished. 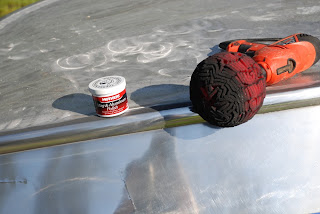 The aluminum in this photo is what it looked like after the cutting process was complete.
I finished polishing the boat using Mothers Aluminum polish that I buffed out with a standard hand drill 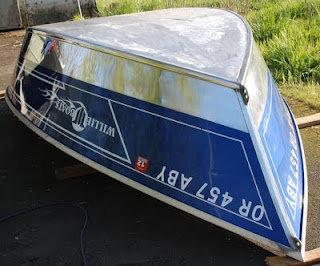 This is how the polishing job turned out...looks pretty good compared to how it looked when I started!


Putting on the Coat-it
When I purchased my Willie the old bottom coating was done in "Gluv-it".  Its a product I've used for years on other boats.  This boat didn't seem to have a properly prepared surface which I think caused the Gluv-it to peel off.
For the new bottom coating I wanted to try a product I had not tried before.  This product is called "Coat-It".  Its another epoxy type product with a new twist.  This product has graphite added which according to the advertising, makes it even more slippery on rocks.  The salesman at my local marine shop assured me that this is a great product.  I'll let you know.
The first thing I had to do was remove all the old gluv-it.  This was a very easy task on this boat because the bottom surface wasn't prepared properly when the gluv-it was originally applied.  The aluminum surface has to be "roughed-up" a bit first.  I used a hand grinder with an 80 grit wheel.  Once I roughed up the entire bottom surface, I went over the whole area again with a scotch-brite pad.
I cleaned the surface completely by wiping it down with this Toluol.  Make sure you apply this stuff with lots of ventilation. 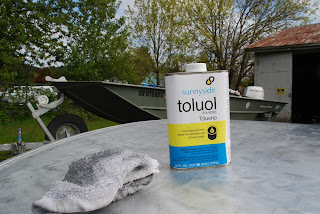 After the Toluol evaporated (only takes a few minutes) I used blue painters tape to cover the polished chines down each side of the boat and on the bottom of the transom to protect it from "Coat-it" that I was sure would drip down. 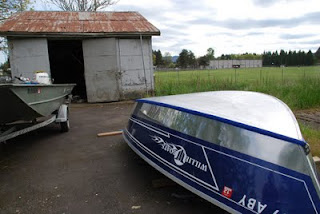 ﻿Mixing the contents of "part A" and "part B" was one of the most important aspects of this process.  Make certain that you thoroughly mix both parts.  If you don't it WILL NOT cure properly.  I used a spatula to remove graphite that had settled on the bottom of the can.  I used three complete "kits" of Coat-It to cover the bottom of my boat.  I think three worked fine, but four would not have been too many either. 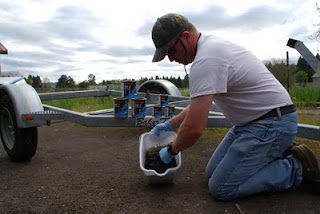 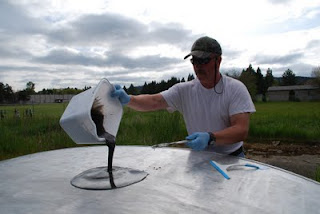 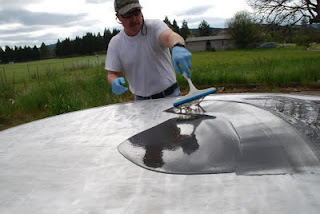 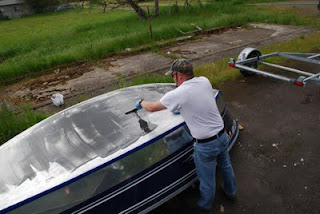 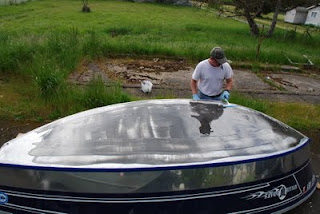 Until I completely covered the entire bottom and chines.  The directions said I had about a half hour of "working time".  I had probably closer to 45 minutes.  The ambient temp. was around 65 degree's when I applied this product. 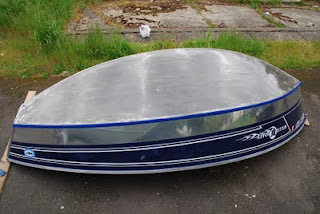 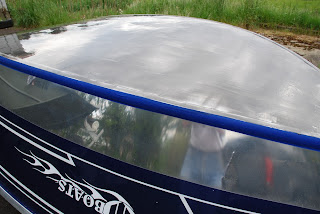 Done!
It took about a full day for the Coat-it to harden and probably another day or two for it to cure.  I applied the product in 65 degree weather that was lightly overcast.  The directions gave working and cure times based on 75 degree temps. so everything was slowed down.  The first night after applying the Coat-it, rain fell, but it didn't hurt the coating a bit.  In fact, it stayed pretty cool and rainy for several days and none of that bothered this product at all.
Over the coming months my new bottom will get a full workout from all the "slides" I use on the Umpqua and all my trout trips on the upper McKenzie.  I'll keep you posted on how "Coat-it" holds up and compares to Gluv-it.  ﻿ 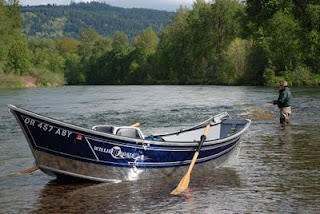 And this is what my Willie "Mac" boat looks like on the "Mac"  Ain't she purdy?
﻿