OR-7 the travels of an Oregon Wolf

An interesting story about a 2 1/2 year old male wolf from the Imnaha pack.  I look forward to the day when I can see one in the flesh on one of my steelhead rivers. I know next to nothing about wolves, but its a subject I'm very interested in.  I've heard some things about their predation on deer and elk which cause me some concern.  I'm also sympathetic to eastern Oregon farmers and ranchers that have lost valuable livestock to wolves recently.  Maybe we can figure out a way to co-exist with wolves.
﻿

Gray Wolf (OR-10)
Photo courtesy of Oregon Department of Fish and Wildlife.
The male wolf known as “OR7” was born in northeastern Oregon in spring 2009. It weighed approximately 90 pounds when collared with a radio transmitter by Oregon Department of Fish and Wildlife (ODFW) in February 2011. It is referred to by biologists as OR7 because it was the seventh wolf radio-collared in Oregon. Its collar transmits location information to satellites daily and is expected to continue to function until at least 2013.
Until recently, OR7 was a member of northeastern Oregon’s Imnaha pack. The Imnaha pack was first documented in 2009 and currently occupies much of the Imnaha River drainage (east of the communities of Enterprise and Joseph) in Wallowa County. The founding members of this pack migrated into Oregon from Idaho.
Although it had as many as 16 wolves in 2010, the Imnaha pack may now have as few as five animals. Several members died in 2011, and four radio-collared wolves (including OR7) have dispersed from the pack since December 2010. Additionally, the locations and fates of five uncollared pack members are currently unknown. According to ODFW, it is likely that some or all of these wolves may have also dispersed from the pack.
The dispersal of younger individuals from a pack is common. Dispersing wolves generally attempt to join other packs, carve out new territories within occupied habitat, or form their own pack in unoccupied habitat. In addition to OR7, known dispersers from the Imnaha pack include OR5, OR9 and OR3:
During winter and spring, the Imnaha pack tends to occupy lower-elevation areas consisting of a mix of private and public lands. In summer and fall, the wolves spend most of their time on public lands at higher elevations. The pack has been documented to kill livestock and two of its members were killed by ODFW in May 2011 in an effort to deter further depredation events. In September, ODFW decided to kill two additional wolves from the pack, including the alpha male. However, that action has not yet been implemented due to a court-ordered temporary stay. As an Imnaha pack member, it is likely that at some point OR7 has been involved in livestock depredation in northeastern Oregon. However, since OR7 was collared in February 2011, it has not been documented to have taken part in any depredation events.

OR7 dispersed from the Imnaha pack in September 2011. Between September and early November it followed an approximately southwesterly course that took it across parts of Baker, Grant, Harney, Deschutes, Lake, Klamath and Douglas counties. During that journey it crossed Interstate 84 and U.S. Routes 26, 395, 20 and 97.
Between November 8 and December 23, OR7’s movements slowed and it occupied a broad area near the crest of the southern Cascades. This area included portions of Jackson and Klamath counties and included much of the Sky Lakes Wilderness. Field work conducted by ODFW determined that OR7 visited an elk carcass and livestock carcasses (bone pile) in this area. On November 14, an animal thought likely to be OR7 was photographed by a hunter’s trail camera on public land east of Butte Falls.
In late December, OR7 left the Sky Lakes area and headed south-southwest to near Howard Prairie Lake and Oregon Route 66. It then turned eastward, ultimately crossing the Klamath River and Highway 97. On December 28, OR7 crossed into California northeast of Dorris, a small town in Siskiyou County.

Since arriving in California, OR7 has traveled in the southern Cascades and across portions of the Modoc Plateau. Its average daily movement has been approximately 15 air miles. Since animals do not typically walk in straight lines, the actual distance it travels is likely much larger.
Dispersing wolves can readily traverse most habitat types and OR7 has passed through ponderosa pine forests, mixed conifer forests, lava flows, sagebrush shrublands, juniper woodlands and agricultural lands. Although OR7 has used private lands (timberlands in particular), most of its route has traversed public lands.
No public safety incidents events or agricultural losses stemming from wolf damage have been reported in California. There have been no confirmed sightings of OR7 in California.
Dec 28 – 31. After entering California, OR7 passed through Lower Klamath National Wildlife Refuge and then continued south-southeasterly across private and public lands (BLM and USFS) near Mt. Dome. On December 31 it was on the Modoc National Forest between Lava Beds National Monument and Medicine Lake.
Week of January 1-7. OR7 remained in roughly the same area between Medicine Lake and Lava Beds NM until January 3. On January 3 and 4, OR7 crossed the Medicine Lake Highlands and moved approximately 30 air miles to the southeastern corner of Siskiyou County. It entered eastern Shasta County’s Fall River watershed on January 5. It soon turned westward and crossed the Pit River and Highway 89. On January 6 and 7, it was in the Cascade Mountains west of Burney. It spent much of its time in an area of regenerating forest that had burned in the 1992 Fountain Fire.

Week of January 8-15. OR7 remained in the Cascades west of Burney until January 9. It then traveled south along the Cascade crest to LaTour State Forest before turning  eastward. By the end of January 10, it had crossed Highways 89 and 44 and was in Lassen County near Bogard Buttes (over 49 air miles from its transmitted location point on January 9). OR7 continued its rapid travel on January 11, traveling approximately 30 air miles to near Grasshopper Valley in northern Lassen County.
As of Feb. 15th, OR-7 has crossed back into Oregon and is currently in Jackson County, Oregon.  Maybe it will be on the Rogue where I see my first wolf?
Posted by Dean Finnerty's fishing and hunting at 11:51 AM No comments:

Every so often as a guide you meet someone whose such a blast to fish with.  They get it.  They know how hard this is.  They understand how special every grab is.  I'm as guilty as the next guy who steelhead fly fishes.  When it come down to it, we talk about fish hooked and landed,  making it sound like it's really not that big a deal.  We catch fish...right?  Every time we're out on the water?...well not so much.  Truth be told, steelhead fly fishing, especially in the winter is HARD!  I expect to catch fish everytime I'm on the water, but there are times, more often than we want to admit, that it doesn't always happen.
Steve Mealey is a man who has devoted his life to the outdoors.  He had an amazing career working for the U.S.F.S. and has spent many years, in fact decades, imersed in the outdoors.  He's worked as a guide, volunteered untold hours for a myriad of various organizations from the Boone and Crocket Club to the McKenzie Guides Association.
Steve started fishing with me seven years ago.  It's always in the winter when he books with me.  It's always on the North Umpqua.  Steve just wanted to catch a winter steelhead on the North Umpqua on the swung fly.  The first couple of years, Steve fished his single hander. Eventually he started to spey fish.  He worked hard.  Damn HARD!  Year after year we'd fish.  The fish wouldn't ever show Steve any love.
Until today. 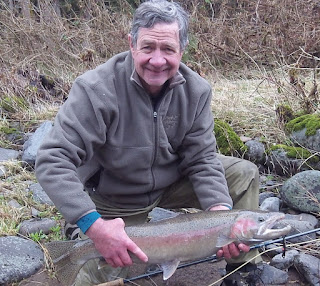 Persistence and hard work paid off and Steve finally got his fish.

For years Steve told me a story about a client he had when he was guiding Sheep hunters.  This man came year after year, trying to harvest a big horn sheep.  I don't recall how many years this fella came to hunt with Steve, but it was several years at least.  The guy just wouldn't give up.  Finally, the guy tells Steve "look, when you finally get me into a sheep, I'm done.  You'll never see me again!".  So one day, Steve and his client are up on the mountain.  They've worked hard!  They find a ram the guy wants to harvest.  He lays his rifle across a steady rest...he takes his safety off when he's ready and had his cross-hairs centered on the ram.  Seconds pass....he squeezes the trigger...CLICK!  Steve is stunned.  The loud report of the rifle that Steve is expecting doesn't come.  The guy has just dry-fired his rifle.  Steve watches incredulously as the ram walks out of view.  Turns out the fellow had no real interest in harvesting a ram.  He just wanted the opportunity and to spend time in the incredible environment that bighorn sheep call home.  Steve said that he never saw the man again.

Steve has always told me that story, telling me that when he finally catches a winter steelhead on the North Umpqua..I'll never see him again.  When Steve lands his fish, I give him a big hug and we're ecstatic that its finally happened for him.  Check that box...he's caught his North Umpqua Winter Steelhead on a swung fly.  The fish fought hard.  Long runs, several jumps.  Steve complains with a smile that his arm is getting tired.  The snow has fallen.  It's cold.  The river is that perfect "steelhead green" we all love.  It's PERFECT!  and after its over Steve tell's me with a big grin, that he'll be back.

﻿
Posted by Dean Finnerty's fishing and hunting at 7:19 PM 4 comments: