For years fly tiers have used epoxy heads on baitfish patterns.  These epoxy heads allow the tier to create more realistic looking patterns and completely secure prismatic-style eyes under the coating of epoxy.  5-minute epoxy had been the epoxy of choice for as long as I've been creating my own epoxy head flies.  A quick trip to the local hardware store for the two part, clear glue and you were ready to get messy! 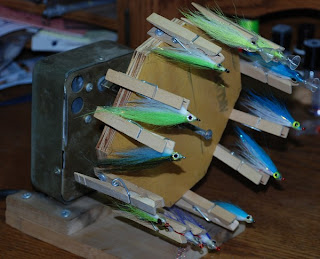 My friend, Bill Nelson of Eugene built this custom "turner" for me years ago.  He bought the motor at a local Goodwill store for a couple of bucks.  The motor is a used "B-B-Q rotisserie" motor.  Bill simply built a base and attached the motor. Then he built a board to attach clothes pins to and attached that to the shaft on the rotisserie motor.  The motor has a simple "on-off" switch.  I would tie up a batch of flies I wanted epoxy heads on.  Then I'd mix up a small batch of epoxy, apply it to the head of the fly and slip the hook in one of the clothes pins, turn the motor on and it would slowly rotate, allowing the even dispersal of the epoxy to create a cool looking head.  Because the epoxy would harden in just a few minutes, multiple batches would have to be mixed and applied to a couple of flies at a time.  Big mess!  Big pain in the Butt!  All necessary back in the day if you wanted to tie your own epoxy head flies.

Then my buddy, and fly tier extraordinaire Tony Torrence introduced me to a fairly new product called "Clear Cure Goo".  He was creating some really amazing epoxy style heads with the stuff.  He explained that it was so much faster, easier and less mess with the "goo" than with epoxy, it was amazing stuff to work with.

So a few months back, I made a trip to the Caddis Fly Shop in Eugene and Lou fixed me up with a kit that included two tubes of the "goo" as well as the ultra-violet light source required to harden the goo. 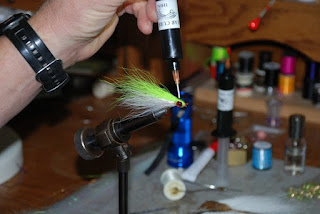 This fall ﻿I've been tying ton's of epoxy style head flies for my fall chinook season and I've really taken a shine to the new "goo".  For a great video on how to use this product, check out this You-Tube video Tony and the nice folks at the Caddis Fly Shop just posted on their blog oregonflyfishingblog.com

Then a few weeks back, a client (or one of my boys) shot at a cripple in the decoys and a few stray pellets hit a decoy.  Pretty quick the decoy was listing to the side like a ship struck by a torpedo.  In the past when this has happened, I've simply taken the decoy out of service for the remainder of the season with the intention of plugging the holes in the off season.  Never happens of course.  But the intent is always there. 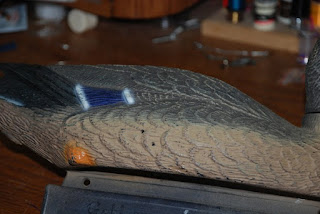 The it occurred to me!  How quick and easy it would be to patch the pellet holes with the new "goo".  Hell, the applicator was perfectly suited to the task and the ultra-violet light hardens the goo in a matter of seconds.  What could be easier!  I could just patch decoys that get hit as the season goes on and put 'um right back out in the pond to continue bamboozling innocent little feathered creatures! PERFECT!  Genius really, EVIL Genius, but Genius none the less. 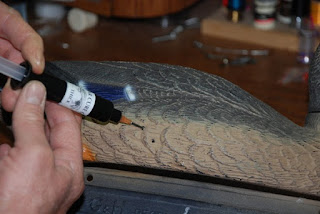 Be sure to drain any water out of the decoy first. Then insert the tip of the applicator in the hole(s) and squeeze a drop into the hole.  Repeat as necessary. 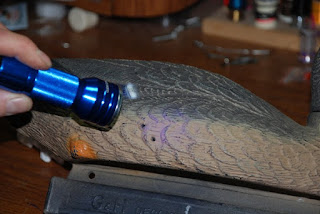 Once the holes have the "goo" in them, hit 'um with the light for a few seconds to harden the goo. 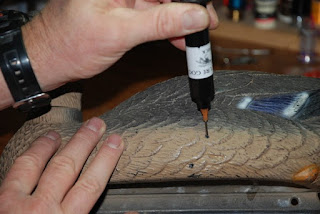 In this case, the pellets passed through the other side of the decoy, requiring entrance and exit "wounds" to be repaired.  It took me less than a minute to repair this particular decoy.

Posted by Dean Finnerty's fishing and hunting at 2:42 AM