Late last fall, I was coming back into town from an evening hunt.  I came out of the woods at dark and by the time I got just out of city limits it was totally dark.  I first saw the movement at the edge of my headlight beam. It started out slowly, moving from the left shoulder of the road, crossing directly in front of the Suburban as I threw out the anchor to avoid hitting the biggest bear I've ever seen.  It was a MONSTER!

Our average sized adult black bears go about 180 pounds.  Good ones are 200 to 250 pounds.  300 pound bears are monsters and anything above that is probably exagerated.  I know, I know, there are 400 pound black bears harvested...but they are exceedingly rare.

This bear, I was sure was pushing that 400 pound mark. 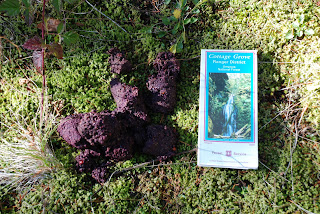 This past week while hunting a favorite bear area I came across this pile of bear spore.  Obviously this bruin is decent sized and still spending some time cleaning up the last of this summers black berry crop.

So a few months ago I heard a rumor that a local youth had harvested this 400 pound bear late last season.  I never saw the bear in question after the harvest, but the sources were knowledgable and reliable, so I assumed the lad had found my MONSTER that had crossed in front of my vehicle last fall.

Figuring the big bears genes had to have been passed on, this season I decided to spend a little more time hunting bears in this same area.  After all, there are TONS of bears in this area and sooner or later I'd find a decent sized one if I put in my time.  Maybe even find another Monster.  It's a tough area to get into unless your willing to spend some time walkin'...uphill...both ways! so it doesn't get a lot of pressure, an added bonus is that its so very close to home.  I could walk there if I wanted.

About two weeks ago, while hunting the area with my oldest son, we came across a pile of very fresh bear skat that for all the world looked like a pile of horse manure.  It was so fresh, that it still contained warmth!  We both knew that this was no ordinary bear.  The critter that left this pile was a Beast! 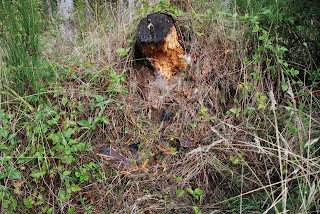 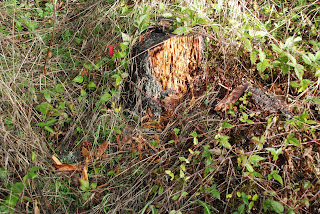 A couple a recently tore up stumps from the "Beast".

Opening morning of Deer muzzle loader season found Josh Farnesworth and I prowling the woods with our muzzle loaders.   I told Josh the area we were going into held tons of bears, including at least one very large black bear.  We passed one spur road that a week ago contained seven piles of fresh bear skat in its 200 yard length.  We parted ways with plans to meet back up in a few hours after each of us had checked a few clear cuts that have been holding good numbers of deer.

At the appointed time, I arrived at our meeting location and found Josh waiting for me.  As I approached Josh, he told me in a very serious tone that he could no longer hunt this area with me.  Confused, I asked "did you get your deer".  Josh shook his head from side to side, pointing at the ground and mumbling somthing about not knowing what left "that pile", but it was either Sasquatch or the biggest bear he's ever seen or heard of!

I looked to the ground where Josh pointed and found the proof-positive evidence that the BEAST LIVES! 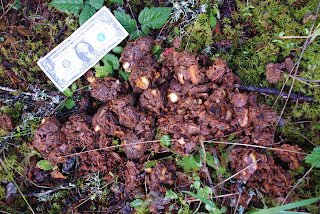 Without intending on making the more refined viewers sqeamish, I want to point out that the yellow chunks in this world record sized pile of bear poo isn't corn, its huge chunks of yellow apples!

In the coming weeks I've got fall chinook on the fly trips booked on the south coast and duck/goose hunts booked in the Willamette Valley, but you can bet, every minute I'm not chasing chinook or birds, I'll be spending in the woods near my home, carting my favorite .54 cal. muzzle loader, topped off with a 110 grains of Pyrodex pushing a 425 grain buffalo bullet and looking for my next encounter with the BEAST!

Posted by Dean Finnerty's fishing and hunting at 3:56 AM